Speak Up, Take Charge, Go All In

Speak Up, Take Charge, Go All In 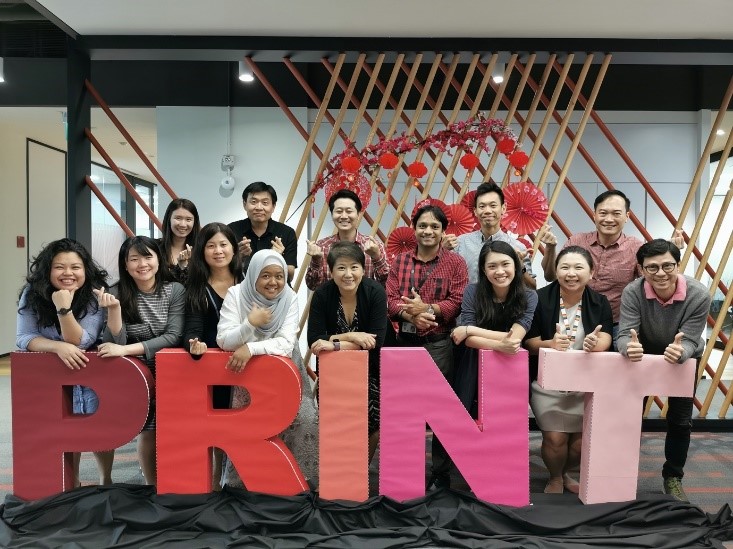 Jamie Neo, (fifth from left) with her team members

The year was 1991. I was in my 20s, a fresh graduate, a new engineer. When I started work at what was then Hewlett-Packard Company’s wafer fabrication plant, I was the only female engineer on the team. It was mostly business as usual – except for one particular male engineer.

At meetings, he’d say quite openly that, “women aren’t as good as male engineers,” and that “they aren’t suited for STEM careers” because we “didn’t have the creativity and ingenuity needed.” Being the only woman in the room, it was clear these remarks were aimed at me.

Initially, I reacted by getting defensive, trying to justify why women were just as good as men, but this just goaded him on.

I learnt to ignore him and carry on with the meetings. But words matter, and his comments started chipping away at me. Was he right? Was I not as good as the men? Two months into the job, when he said it for what must have been the tenth time, I got up, walked back to my desk, and started tearing up.

Another male engineer who saw me crying told him off, and those comments never surfaced again. That day, I learnt an important lesson. While I appreciated my colleague’s help, I realized I should have been the one to speak up, stand up for myself and take charge.

It starts with self-awareness.

Know your interests, understand what gets you energised. In university, I loved anything related to crime scene investigations thanks to the TV show and grew a passion for problem solving. In my second year at HP, I had an opportunity to join the new failure analysis lab, the first of its kind in Singapore. I immediately put my hand up. I was the lab’s first engineer.

Next, know your strengths and weaknesses. In 2009, I took a global role overseeing manufacturing of inkjet cartridges. I was good at leading a team. But sitting at my desk each day, I struggled thinking, “How can I drive the business?” “Is this the right business decision?” These uncertainties grew heavier each day.

So a year later, when the opportunity to learn about business intelligence and data analysis came up, I took it. I wanted to focus on closing the gap in my skill set and complement my technical skills with business knowledge – especially how to translate data into customer insights.

Little did I know that decision would kickstart the next phase of my career and my journey towards Industry 4.0.

When I transitioned back into manufacturing in 2014, I looked into how we could use Big Data in manufacturing. That idea sparked the development of HP’s Smart Manufacturing Applications and Research Centre (SMARC), which opened in Singapore in 2017. At SMARC, you’ll see engineers working on incorporating robotics into manufacturing lines, you’ll hear the soft whirr of HP’s Multi Jet Fusion 3D printers printing prototypes and watch as our teams harness data analytics to optimize our manufacturing processes.

While competency and hard skills are important, so are soft skills, not least the ability to tell a compelling story. Business is as much about people and emotions as it is about hard numbers and logic. Business involves insight, judgement, as well as risk-taking. As a leader, you need to tell your story and convey your vision. This deepens your influence, instills confidence and inspires the troops. As a leader, influence is your key currency.

This brings me to my last point. As women, we need to advocate for each other and to be visible. When we were launching SMARC, I was fortunate to have worked with a female colleague who helped me and my team build and articulate the story of SMARC and rally other senior executives around it. She also convinced me it was important for me to raise my own visibility. That in turn has set me on the path to speaking at conferences – not only in Singapore but also Australia and United States.

There’s been progress, but women still face many challenges in the workplace, including unconscious bias and the need to balance their family and career. I actively mentor junior female employees in HP through our many corporate initiatives and I urge all women to support your fellow colleagues in any way possible. Every act counts.

It’s important that we remember that men are also allies in this journey. Early on in my career, I had a male manager who not only gave me plenty of opportunities, but always encouraged me to grow professionally by taking on new roles – that was key in my development.

It’s not always easy, but it’s definitely rewarding. Recently, I was competing in a competition organized by a local manufacturing federation. When I passed the panel of male judges my name card and they saw the title “Director of Engineering”, their eyes lit up. I smiled. What a journey it has been.

This International Women’s Day, I urge everyone to: Speak Up, Take Charge, Go All In.